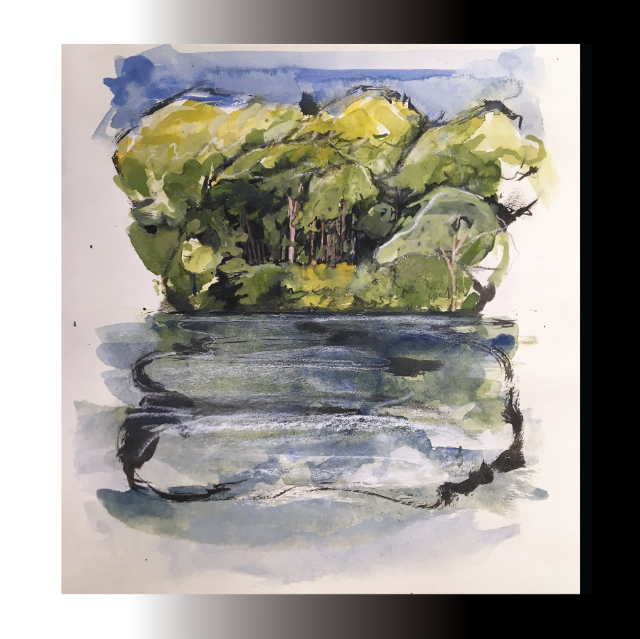 Brooklyn based post-hardcore band Big Ups have kept a low key presence while radiating a big sound with every record they release. The band consists of Brendan Finn on drums, vocalist Joe Galarraga, guitarist Amar Lal, and bassist Carlos Salguero Jr. Big Ups has drawn comparisons to legendary post-hardcore bands like Fugazi and The Jesus Lizard, but they’re much more than that. Their music hangs on to basslines and guitar progressions that reminisce in 90’s alternative rock, something along the lines of early Smashing Pumpkins, Helium, and Dinosaur Jr. Galarraga has said about their music that “there’s something else that’s going on that I don’t even know if we can quite put our thumb on.”

They’ve been a stripped-down rock band with only the essential elements since 2010 and they’ve been doing it with a fresh sense of character. For their third album, Two Parts Together, released via Exploding in Sound Records, Big Ups decided to play with sounds that are new to them to add to their atmosphere including violin, synthesizer, glockenspiel, drum machine, and field recordings.

Galarraga has also stated that he “wanted to be in a band that is heavier in sound, but accessible.” They definitely maintain the heaviness that they established for themselves in their first two albums. Certain parts of their songs have choppy rhythms, lopsided time signatures, and irregular transitions, influenced by and for fans of math rock. But Two Parts Together isn’t a completely accessible album. Parts of it could appeal to the masses, but the album as a whole is too experimental. That’s not to say that it isn’t good. The album is strikingly dynamic, but it’s about as accessible as a Sonic Youth album, a band of legendary status that never rose above the underground, and that’s where this kind of music succeeds.

The first track, also the title track, begins with chaotic strumming and a crescendoing crash cymbal, then drops dramatically into a barely audible ambiance, a spacious verse section. This kind of movement defines Two Parts Together, an album composed of wildly dynamic movements between quiet and aggressive progressions. This is a moody album, one that swings from cathartic pounding to tranquility like a slow pendulum in an enormous clock.

Big Ups find their uniqueness in playing with opposites. Two Parts Together is full of lightly steady drumming, pretty guitars and basslines that suddenly burst into thunderous distortion. This is a band that will create a peaceful milieu and let it float with elegance, then disrupt the peace with crunchy, muddy distortion and screams. The shifts are polarizing, crashing into each other and then disappearing.

The vocals never rise above the instrumentation, rather it is another equal part of the music. In all three of their albums, Big Ups have not applied a single vocal melody to their songs. Galarraga goes for either spoken word or shouting and screaming, and this adds to the dramatic dynamics of Two Parts Together. The spoken word verses are delivered as quiet ruminations, insights that can only come from difficulties, epiphanies that can only arise from trauma.

Galarraga’s vocal work often sounds like the whispers of an inner voice, something subliminal or subconscious. His spoken word delivery can be so calm, it almost sounds troubled. When recorded and played through a field recorder, his voice has a disembodied effect, as if it’s coming from a distant loudspeaker.

Aside from his delivery, Galarraga’s lyrics have a mysterious quality, something contemplative and deeply philosophical. He articulates a search for self-realization in an enigmatic world. The closing lines to “In The Shade” give off a looming and ominous feeling: “What’s latent / what’s hiding / whats scared / what’s unknown / what’s dormant / untapped / in the shade.” It almost reminds me of cosmic beings in an H.P. Lovecraft story. Other lyrics throughout the album are similarly ambiguous, but also explore the idea of how one should perceive the world. Galarraga commands you to “look into the crystal / and see what you want to see” in “PPP,” one of the album’s singles. In “Fear,” the album’s other single, he asks, “Which version of the world / is the one that’s worth believing?” before shouting the chorus: “How you fear what you know / how you fear what you don’t know.” There is an idea of creating meaning for oneself that is present throughout this album, as well as a need to sift through the many facades of truth that a person can be subjected to in life.

Two Parts Together spins with emotion and intellect, but not recklessly. It’s an incredibly well-composed album that takes sonic risks. Listen to it and other records by Big Ups on Spotify, iTunes, and other streaming services or find the album in a record store near you.