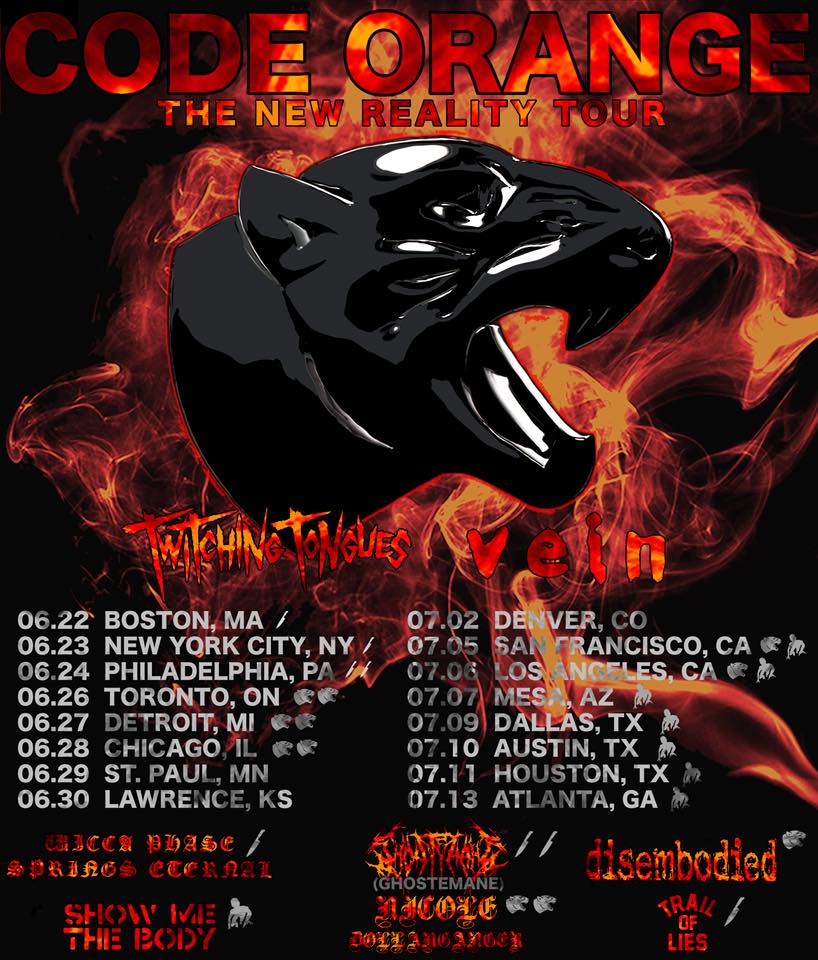 The floor waits to heat up in Hell, one of three indoor venues along with Heaven and Purgatory at The Masquerade in downtown Atlanta. It’s Friday the 13th and the lights are low while people trickle in for the last night of Code Orange’s “The New Reality Tour” featuring support from hardcore peers, Vein and Show Me The Body.

Vein’s backdrop hangs in soft blue and green light beams like a sign of impending catharsis. This is a hardcore punk show, so the people are ready and willing to burst into a frenzy as soon as the music starts.

Hailing from Boston, Vein opens the show with songs from their debut album, Errorzone,  released on June 22nd. Their performance is immediately manic to match they’re erratic music. Vocalist Anthony DiDio welcomes the audience to return the animosity. The mosh pit forms and persists. People at the front of the stage groove and scream the lyrics of songs like “Virus://Vibrance” and “Doomtech” back at Anthony who sticks the mic into their faces so their screams can be amplified like his.

Show Me The Body from NYC hits the stage next. They play songs from their 2016 debut album, Body War. This is a hardcore punk band heavily influenced by hip-hop, noise music, and sludge metal, creating a heavy and groovy sonic concoction. There is nothing fancy in their performance. No backdrop. No wild lights. The minimal performance is engaging considering frontman Julian Cashwan Pruitt’s vehement presence. Pruitt plays an unusual instrument, a modified banjo that sounds like it’s strung with guitar strings. Pruitt stalks back and forth across the stage and when he spazzes out in short tantrums, spit flies from his mouth. Fans demand that they play “Body War,” the titular track of their album, and before they do as their last song, they humbly thank Code Orange for taking them along on “The New Reality Tour.”

Soon enough, after the crowd condenses, Code Orange take the stage with a violence that envelops the audience. The band from Pittsburg play songs from last year’s Grammy-nominated album, Forever, with so much passionate energy and rage in their faces.

The five members of Code Orange clearly have a strong connection. They’ve been making punk and metal music with each other for the last decade. No one leads the band. They all move together. No one is the lead vocalist. Keyboard and guitarist Eric Balderose, guitarist Reba Meyers, and drummer Jami Morgan trade vocal duties. Unfortunately, bassist Joe Goldman couldn’t be there due to a recently sustained injury, so someone wearing a Friday the 13th hockey mask stood in as bass player, which was fitting for the day. There were several people wearing masks on and off stage.

Code Orange have a spectacular stage presence. Balderose swings his blue hair in front of his synthesizer set up and occasionally steps away to amp up the crowd. Reba shreds her guitar and jumps around, swinging and throwing her long red hair in all directions.

Guitarist Dominic Landolina persistently commands the crowd to give up more and more energy, and the crowd does so with an astounding fury. There are writhing people being carried by the many hands of the audience. Bodies climb the stage just to run and jump from it. In fact, Code Orange invites people to climb onstage to jump off. People are compelled, beckoned by the music, to fly at hardcore shows.

There is an incredible communal energy at hardcore shows. They are extremely participatory, and as violent as they are, the energy is positive. If somebody falls in the mosh pit, someone else helps them up. Everybody is sweating together. Everybody is shoving each other together.