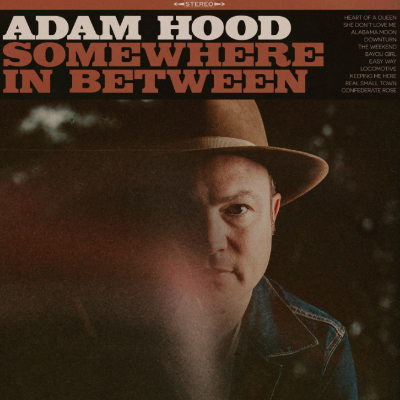 You may have heard Adam Hood’s songs through the voices of many country music stars such as Miranda Lambert, Lee Ann Womack, and Little Big Town. The Opelika, Alabama native has spent much of the last decade fine-tuning his songwriting chops for others as well as performing as a solo artist. Now, Hood is getting ready to release his fourth full-length studio album, Somewhere In Between.

Adam Hood’s style of music is a mix of country, blues, folk, soul, and you can even hear a bit of alternative rock influence. There’s a lot going on here. In fact, he doesn’t want to pin his songs into any particular category. He simply calls it “southern music.”

This isn’t the kind of pop-country music you hear on the radio about tractors, trucks, cornbread, and barbecue sauce stains. Hood’s lyrics are deeper, honest, more thoughtful. He exercises a strong storytelling ability in these songs, painting detailed images of wholesome southern small towns and the good people living in them. These stories seem to be at least partly autobiographical, as Hood obviously knows them well. Coming from a working-class family himself, his lyrics address the quaint life of working-class southern folk. Throughout his new album, Hood addresses the importance of persisting through hard times and taking time to appreciate the simple life.

One idea that pervades Hood’s music is the idea of restlessness, which may come from his persistent touring throughout the years, driving here and there from gig to gig, at times alone and more recently with a full band.

Songs like “Keepin’ Me Here” and the anthemic “She Don’t Love Me,” featuring Brent Cobb, remark on Adam Hood’s tendency to stay unsettled as well as the absence of a woman in his life to keep him anchored in a particular place. There is heartache in his music, but it’s clear in the liveliness of his music that his lovelessness hasn’t turned him bitter. “Keepin’ Me Here” illustrates his restlessness and lovelessness perfectly, and is also the most southern rock song on the album with its steady electric strumming and driving drums.

“Downturn” points out his preference to keep his life circumstances from stagnating, as he sings, “Running in circles beats the hell out of sinking in sand / and I simply can’t stand to stay where I am.” Hood is wise to the notion that any kind of change, whether good or bad, is valuable.

Other songs preach the notion of finding something to look forward to, even if it’s something minimal like having a little time off work. “The Weekend” is the kind of blues song that you would hear a band play over the pool tables of a dirty southern whiskey bar on a Friday night, a tune for the working class folks looking forward to the little things in life that keep them going week after week. The truth behind songs like this, “Easy Way,” and “Real Small Town” is that people don’t need a fortune to be happy. Somewhere In Between is a collection of songs that pay homage to everything that Adam Hood values about growing up in small-town Alabama through his love of southern music.