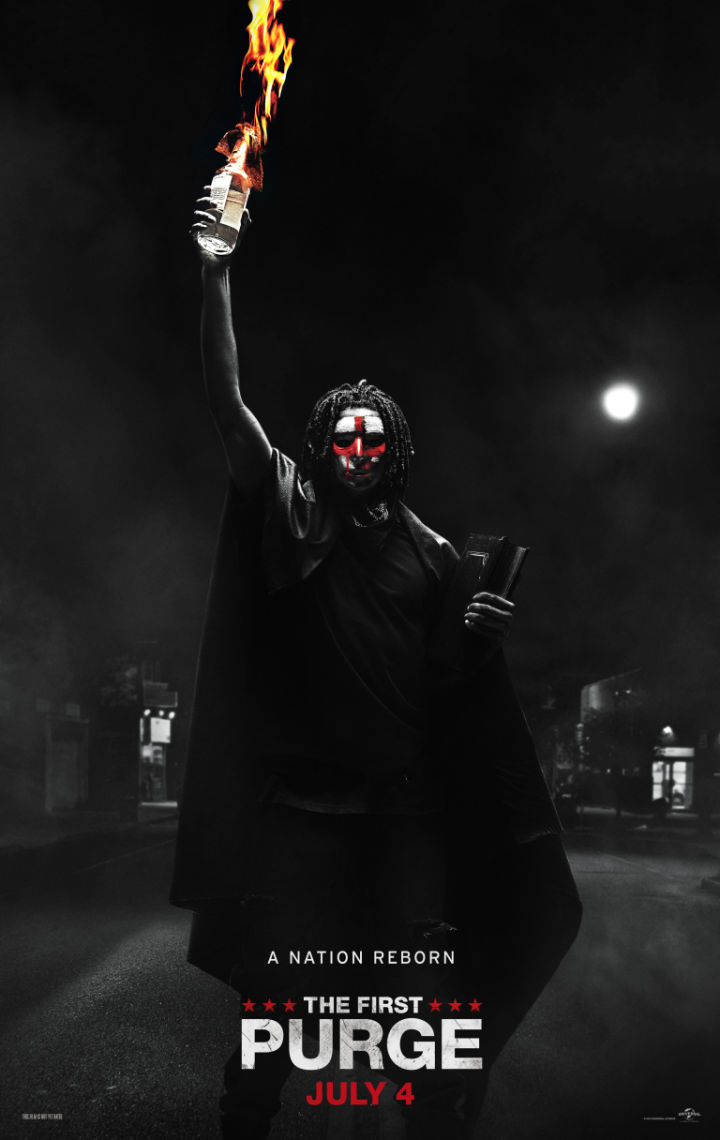 The first scene in The First Purge is an interview between two men. One is a convict and the other is a government agent. They discuss the convict’s need to release the violent nature inside him. The agent reacts with favorable curiosity, as if this man will be useful to him.

Soon you see a government worker alongside Dr. May Updale (Marisa Tomei), deemed “The Architect” of The Purge and working with the New Founding Fathers of America, a government organization, to conduct a social experiment, which will be known as “The Purge,” but the NFFA have ulterior motives force them to manipulate the experiment. They want to lessen incarceration and establish population control, and they need the experiment to be a success.

This is the premise of “The First Purge,” as well as an exemplification of the entire franchise’s premise. The actual event known within the franchise as “The Purge” is a planned phenomenon that benefits capitalistic institutions more than it benefits common people. In the movie, the practical reason for the NFFA to establish “The Purge” is for people to be allowed to release their inner aggression for twelve hours and contain it within themselves for the rest of the year, thus reducing crime rates and establishing peace.

Like the other three films in the series, you can expect a lot of murder and untamed behavior. You can expect the exact same narrative formula. There’s a lot to say about these movies, considering the heavy political subtext, but they’re all basically the same. The commencement siren sounds off at about twenty minutes into this movie just like the other ones. You watch a group of people try to survive the dangers of the night.

This entry into the franchise continues the socio-political horror story set in the near future, although it takes place closer to present day, and thus is established in more believable circumstances. There are obvious parallels with this film and current American politics, namely the decisions of the Trump Administration in terms of establishing morally bankrupt policies for what they would address as the greater good. This is obvious from the pre-released promotional images of a bright red ball cap with the words “The First Purge” embedded on it in white letters, a jab at Trump’s “Make America Great Again” campaign merchandise. This night of bloodshed is said to make the country better than ever.

Of course, like the other “Purge” films, the political aspects of the story are just a subtext. The main plot revolves around Nya (Lex Scott Davis) and her brother Isaiah (Joivan Wade), two humble citizens of Staten Island where the psychological experiment is contained, are who we follow and hope to stay alive until the end. Nya has a longstanding relationship with a man named Dmitri (Y’lan Noel), who she was once romantically involved with, who is also a drug kingpin and has a large amount of money and resources. Aside from these three, the film is packed with supporting characters, perhaps too many. All of whom you can expect to meet an untimely death.

So, what does this installment of the franchise offer that the previous films didn’t? Well, “The First Purge” seems to properly depict what people actually want to do during twelve hours of lawlessness. They want to have a good time. They throw parties, drink, dance. This film is much more believable in its portrayal of human desires than the other films. A major problem with these movies is that they assume everyone hides the fact that they harbor psychopathic and sociopathic tendencies, that they would do horrible things often if only it was legal, and they can unleash these tendencies on Purge Night by murdering, raping, and stealing. It’s an absurd depiction of mankind for the sake of horror.

There’s a surrealistic quality in the beautiful, yet deranged imagery of some of the Purge participators. The director makes heavy use of slow motion, dutch angles, and extreme close ups to express the unleashed madness of those who choose to roam the streets. The insanity of the night often comes from facial expressions. Skeletor (Rotimi Paul), the convict from the beginning scene, is a grotesque and almost cartoonishly exaggerated homicidal maniac, often filmed in head shots or extreme close ups to capture his hideous face, his scarified forehead and rotting teeth. Like the other movies, the masks and costumes add a particularity to some of the characters. They dehumanize the most willing Purge participators, making them demonic, monstrous. In this sense, some characters are acceptably one-dimensional.

“The First Purge “has plenty of jump scares and moments of intimidation. These movies have been good at building and sustaining tension. This entry feeds the frenzied popularity of the franchise. Although this may be the most compelling film out of all of them, it only provides a small amount of newness to the franchise, but if you’re a fan or are curious enough to find out why others’ like it, you’ll want to see this one. The movie hits theaters on July 4th.