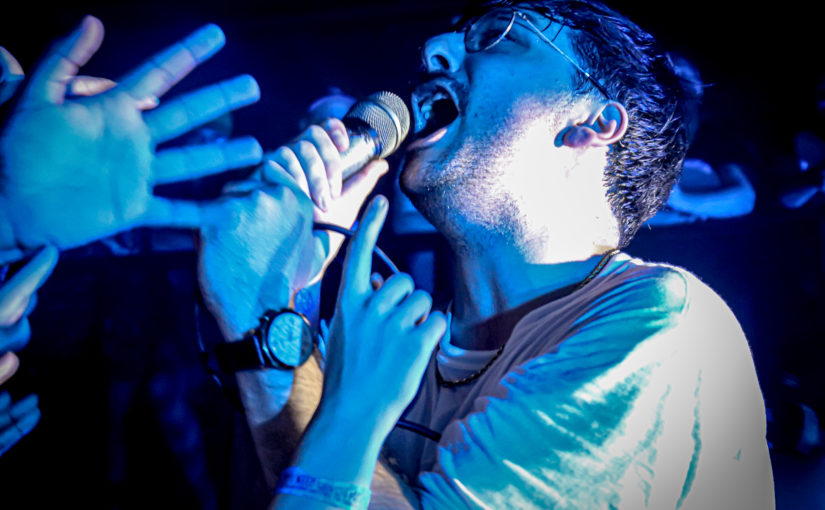 I was looking forward to seeing a passionate spectacle at The Masquerade in downtown Atlanta. I wanted to be a part of it. I’ve seen enough concerts at venues like this with bands like Foxing to know what I was getting myself into. Foxing is the kind of band that becomes their music when performing. They don’t just write songs and play them for people. They become possessed by their own music.

But before Foxing is the first opening band, an indie pop band called Kississippi, composed of three girls and two guys who look so young they must barely be in their 20s. They look awkward, as if they haven’t grown into themselves yet, but they’re content as long as they’re playing their songs. They’re touring in support of their debut album, Sunset Blush. The Philadelphia band is the vehicle of creativity for Zoe Reynolds, who sings, plays guitar, and writes the songs. She sings sweetly through their driving, down-strumming movements, smiling at her band, slightly embarrassed and happy to make everyone her friend. Kississippi’s music is groovy, danceable, and Zoe remarks on how this is the most responsive that a crowd has ever been for them.

Chicago’s Ratboys played next, lead by the goofy and personable Julia Steiner on vocals and guitar. They just released an EP titled GL, which is composed of extra songs from the studio sessions of last year’s LP, GN. Ratboys rock through a couple of songs and I’m slightly stunned by the changing expressions on Steiner’s face, how her nose scrunches and she bares her teeth, how she rolls her eyes upward. Between songs, she says things like “I’m glad you’re all fucking cool,” and, “I’m trying to figure out how to talk without cussing.” She has a great sense of humor, poking fun at herself and being hyperbolic. Steiner’s smile is contagious even when she mentions that the next song they play is about being miserable. The crowd cheers and she says, “I’m glad we’re not alone in this.”

Then comes the soulful and trance-inducing performance from Foxing. The St. Louis band released an album, Nearer My God, earlier this year. Foxing employs plenty of synth and well-honed digital sounds alongside guitars and drums. They play some of their most chest-swelling songs, including “Glass Coughs” and “Night Channels.” The room rumbles during “Bastardizer,” a guitar-heavy song from their new album. Frontman Conor Murphy pulls out a trumpet and blasts it at climactic moments. He moves back and forth, on and off stage, to sing as close to his fans as he can get.

Foxing commands a communal presence in a wash of light and color, playing voluminous post-rock that seems to epitomize the feeling of coming out of an immense struggle. There is a spirituality that lifts and permeates throughout their performance. Even the moments between songs are ethereal with the sound of an ambient drone note traveling while Murphy speaks about how much everything means to him. “This is the best show of this entire tour,” he says. “I really mean that.”