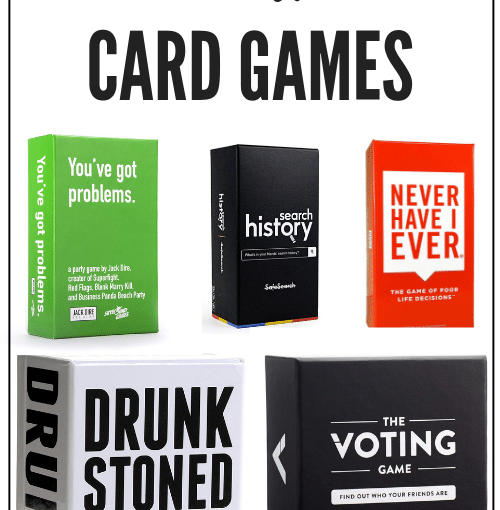 Let’s talk about the best card games for adults. Do you love playing games as much as we do? How about ridiculous card games geared towards adult humor, the kind you can enjoy around a table with your friends, family, or whoever you like to have fun with face-to-face?

Let’s face it: It’s fun to embarrass yourself sometimes. Some of these games will have you exploring taboo subject matter, and you’ll have a fun time gathering your wits and keeping your composure.

These games aren’t just for killing time. They’ll make you laugh for hours.

Each of these fun games can be played with multiple people. Play with your friends, family, co-workers, and even your bosses. You can even play these with total strangers. These card games are fantastic icebreakers to use at small gatherings.

The number of cards for each game varies depending on the complexity of the gameplay. Some games have a high number of cards that are used once and discarded immediately, although you may want to play a game that reuses cards.

Many of these card games are meant for adults, considering the mature and often times explicit content, although some of them are all ages. Keep an eye out for age limits if you want to buy one of these games for someone else.

Some of these card games are more portable than others. Some require complicated gameplay and come with more pieces, and others come in a tight and small package. The details are listed as follows.

Cards Against Humanity is one of the most popular card games ever created. This is not a game for anyone who isn’t an adult. It’s marketed by its creators as “A party game for horrible people” and once you play, you’ll understand why. It’s a question and answer type of game. Someone lays down a card that asks a question, and the other players answer it with a card from their hand. The humor comes from the way that players choose to answer, which can be absolutely offensive and absurd. In fact, it’s nearly impossible to not be a jerk while playing. And that’s why this is one of the best card games for adults.

This game will surely tickle your funny bone whether you like cats or not. If you like explosions and laser beams, even better. You may even find a goat somewhere in the mix. This table game for adults is highly strategic. It’s a version of Russian Roulette where players draw cards in fast-paced action until someone finds an Exploding Cat card, in which case that player dies and is out of the game unless he or she has a Defuse card. These can take the shape of a laser pointer, a belly rub, or catnip. All the cards are used carefully to avoid being exploded by a cat. Sounds action-packed, right?

Uno is a popular card game that anyone can play for hours and have fun the entire time. There is a reason why it’s such a popular card game. Honestly, it’s hard to stop playing once you get the cards moving. Special Action Cards and Wild Cards add an unexpected element to the gameplay, moving the game in different directions.

Watch Ya’ Mouth requires players to wear “cheek retractors” that stretch out the skin of your cheeks, fully exposing your teeth and gums and making it difficult to pronounce words, which is where the gameplay starts. The wearer speaks a phrase on a card and the other players try to interpret what is being said. This is the game to play if you’re down to make a fool of yourself.

Monopoly Deal is a version of the classic board game, except it won’t take you forever to finish. In fact, it says on the front of the box that you can “Play in 15 minutes.” this is a fast-paced table game for adults that requires players to collect sets of property while avoiding Debt Collectors and Deal Breakers which can cause you serious misfortune in a single turn. This is a fun game if you have a few minutes to kill.

Spot It is a matching game where players match symbols between two cards. In this fun card game for adults, the cards are circular and each one has several symbols on it. Each symbol only matches with one other card, and there are fifty symbols in all. There is a lot to look at here. There are five mini-games in the rule book to keep you playing over and over again. All 55 cards are packed into a small tin, making this game very travel-friendly.

Five Crowns is a variation of Rummy, a classic card game that can be played with a normal 4-suited deck of cards, except Five Crowns incorporates a fifth suit in the mix, adding a bit more complication. The game is played in eleven rounds and there is a rotating wild card that increases in value as well as an increasing amount of cards on the table. This makes for a fun game for adults indeed.

5 Second Rule will bring your goofy side out as you are timed at a strict 5 seconds to list answers that fit a topic on a card. This isn’t implicitly a table game for adults, but it becomes one when you play. The timer makes a silly sound and may cause you to lose focus, but that’s part of the game. You never know what comes out of your mouth when you have so little time to prepare.

In DRUNK STONED OR STUPID, you and your friends will have a blast finding out about deeply shameful aspects about each other. The basis of this table game for adults is personality traits and humiliating your friends. Each card has a disgraceful trait on it, and whoever collects 7 cards first loses. The creators of the game confess that this game is not for everyone. But if you can keep a strong will and feel proud and uninhibited about who you are, you’ll love this game.

The box for Disturbed Friends distinctly confesses that “This game should be banned”, which means this party game is a must-play. The cards have multiple choice questions on them that are read aloud. The players then choose which answer they think their friends would choose, and the answers are often sexual, unethical, and outright horrible. This is a card game for adults that is meant to expose the inner you for an excitingly accusatory time.

Fans of the animated television show, Rick and Morty, will love Rick and Morty Total Rickall, which features characters from an episode of the show with the same name. But even if you haven’t seen the episode or any of the show, you can still have a hilarious time playing and enjoying the nutty characters. The premise is that there are parasites masquerading as family members and close friends. These parasites have inserted themselves into the memories of the real family members of the titular characters. It is up to the player to figure out which of the many eccentric characters that appear on the cards are real and which ones are monsters that must be exterminated. Truly one of the most fun card games for adults.

Never Have I Ever

Never Have I Ever is a fun card game for adults that contains explicit material that is sure to entertain you and your group of friends. This is another game that plays off of the players past experiences, which may be embarrassing or awkward or downright regretful. But in terms of the game, your regrets earn you points! A player will have to lay down a Red Rule Card and other players must answer with a Blue Play Card. These blue cards represent something you may be guilty of, but if you aren’t, it must be discarded. The person to collect ten blue cards wins. In this game, the winners are the guilty ones.