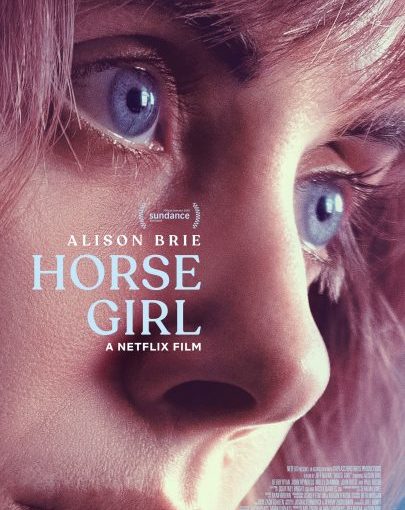 A slow, intriguing burn that doesn’t quite pull itself together in the end, Horse Girl is an artful character film that moves between a grounded portrayal of mental illness and Lynchian surrealism.

Produced by Duplass Brothers Productions, this is the latest film from writer/director Jeff Baena who has worked with Alison Brie on 2017’s comedy The Little Hours. Brie stars and serves as a co-writer. In an episode of her co-star’s podcast, There You Are with Debby Ryan, Brie states that Baena writes scripts in outline form and is partial to improvisation. In his past projects, improvisation has worked for humor’s sake, but for Horse Girl, it adds realism through naturalistic character interactions.

Sarah (Alison Brie) is an introverted, socially awkward young woman who works at an arts and crafts store. She lives in an apartment with a roommate, Nikki (Debby Ryan), and has some hobbies, including taking a Zoomba class and watching a corny paranormal TV series. Sarah visits a horse riding stable occasionally where a horse she once owned is kept. Throughout her interactions, except for her coworker Joan (Molly Shannon), she makes people uncomfortable with her tendency to linger around. Brie’s naturally wide eyes are perfect in depicting the gullibility of her character.

On the night of her birthday, Sarah is persuaded by Nikki to celebrate. The two of them get drunk with Nikki’s boyfriend, Brian (Jake Picking), and his new roommate, Darren (John Reynolds). Romance rises between Sarah and Darren, and he eventually asks her on a date.

To disrupt the tenderness, Baena interjects eerie moments that gradually grow in severity into the plot of the film at precise times. Sarah sleepwalks, experiences lapses in time, and has a recurring dream of herself lying on the floor of a white room between two strangers. It feels like a looming danger behind her innocuous life.

Sarah contemplates her resemblance to her late grandmother. She later develops an interest in aliens when researching time loss, which seems harmless at first, but soon leads to odd conspiratorial connections. The movie takes a sharp turn when Sarah takes her date with Darren to the cemetery to visit her grandmother’s grave.

Alison Brie delivers a devoted performance in Horse Girl. Brie pins down the reserved, sweet demeanor of Sarah in the first half of the film, before Sarah’s mental breakdown. There are moments when her innocence comes off as fun. Watching her move around stiffly with others in her Zoomba class is amusing, and the dance scene between Sarah and Darren is an example of the goofiness that Brie has exhibited in past comedic projects. As soon as Sarah begins spilling her thoughts, Brie exercises her dramatic acting skills to capture Sarah’s chaotic mindset.

Composers Josiah Steinbrick and Jeremy Zuckerman help build the bizarre tone of the film with the soundtrack. Shimmering music matches tender moments. Droning sounds match her dream sequences. When Sarah tries to make sense of her dreams and losses of time, the severity is often downplayed by a mischievous tune, which makes her seem like she’s investigating things like a kid detective. Even when she loses track of reality, gentle music plays, which, at that point, adds to the creepiness.

What’s most interesting about Horse Girl is it never strays from Sarah’s point of view even as her thought processes veer out of control. Elements of her mind bleed into each other illogically, which is visualized by editor Ryan Brown’s experimentation with editing to portray the way her mind works. Subtle cuts and slow dissolve transitions create time and space lapses. Ominous sound edits illustrate her deteriorating mental state. The disruptive edits are a bit clichéd, but they spark enough curiosity to see where it takes the story.

Baena does a great job of avoiding overt depictions and storytelling in terms of illustrating Sarah’s mental state. His use of close-up and slow zoom-in shots create moments of claustrophobia as if Sarah’s mental instability is closing in on her. Details that Sarah notices in certain scenes don’t follow the logic of the following scenes. One actor is switched for another in portraying a single character. These are inventive ways of depicting Sarah’s confusion. It’s disorienting and stressful, and also fun to watch all the creative approaches taken to convey these feelings.

There are aspects of the plot that are left unresolved, such as the wall in Sarah’s apartment that looks like it was damaged by a large animal. This detail goes nowhere. Past trauma troubles Sarah, but it is not detailed enough to understand her better. Certain scant scenes involving family members and friends are meant to allude to answers but ultimately lead to more questions. Viewers will be left wanting more information about Sarah’s relationship with these people, as well as the meaning of the horse, without getting any clarity in the end.

The final scene elicits more than one interpretation, and viewers can find closure in the established ambiguity, but they’ll be more than likely left confused. The film’s stylistic audacity works well to establish a surreal mood but doesn’t make up for the plot holes. Still, Horse Girl is intriguing enough and worth watching for its portrayal of mental illness and cast performances.